For the last blog I suggested that Part-Worn tyres could be worth a shot under certain circumstances. Whether it is bad advice or simply making people more aware of what to look for is up to you. In this article I will explain how to consider the above points: 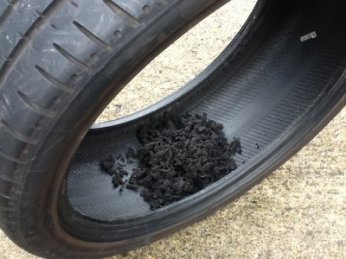 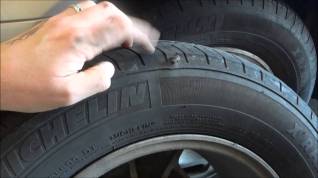 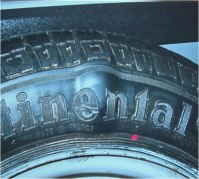 If you see tyres like the above being sold by a vendor run a mile from them!  No ifs or buts.

This is a serious one.  Having punctures in the centre tread pattern of the tyre that have been repaired correctly are fine.  However, if:

-There is loose rubber on the inside of the tyre
-Deep cuts to the sidewall (potentially an MOT failure)
-Perishing of the rubber
-Puncture or puncture repairs beyond 75% of the centreline of the tread.
-Bulges and deformations anywhere on the tyre

Walk away.  It’s that simple.  The tyres in the above will are likely to have been weakened and make your car a liability.

This question is a case of “How long is a piece of string?” If you are a low mileage user you may think “Aha! That cheap 3mm tyre looks like a bargain! But consider this. The minimum legal limit for a tyre in the UK is 1.6mm. What does this mean? Your 3mm tyre isn’t the bargain you think. After all:

With the above in mind it pays to see what the level of tread is worth. If you have an idea of how your brand of tyre (or others) wear down you could obtain a figure for the true cost as follows:

In a number of cases when you check those figures the value is not as good as it initially seems.

Bear this in mind. New tyres have between 7 to 9mm of tread on depending on the tyre so anyway between 5.4 to 7.4mm worth of tread.

This point is often overlooked with people mainly going on the visual condition of tyres. To many people tread on the tyre equates to how much grip the tyre has.  It is an easy one to read too!

Look out for where it says DOT on the tyre.  At the very end of the string of numbers and letters as follows:

You may think “Oh, but I only have a classic car, the old tyres will be fine” or “My (or your wife’s etc.) car isn’t that fast. There is no point in shelling out for new or good rubber” No, not that kind of rubber folks….

The fact of the matter is as rubber gets older it does not grip as well as when it was fresh. It’s one reason why you won’t see many people selling tyres older than 3 years old, and generally, they tend to discount the tyres at this age.

While I’ve had some interesting experiences on old tyres, including a wayward Frenchie and a Triumph Stag that just wanted to go sideways here is an interesting thought.

Classic Car Weekly did an article on new tyres vs. old. The car? An MGB GT. Hardly the first word in performance. The tyres? The first set were Pirellis that were 10 years old but still with plenty of tread left on them and crack free. The other tyres I think may have been middle of the road tyres.

The results were surprising. With the Pirellis on the car took 30% longer to come to a halt from 30MPH compared to the modern rubber? Do you still think old and cheap rubber is the way forward? 30% is a lot no matter how you look at it.  If someone hit someone you knew in town below the speed limit with old tyres would you still be thinking the same?

This question is always an interesting one.

In two cases I bought wheels with tyres. Until I changed the tyres the car had odd characteristics ; On a Peugeot 106 GTi it was a near death experience driving it back and on a Clio 172 it just wanted to go left until I switched the tyres.

The reason. They had worn due to poor alignment on the previous car. If the tyre has not worn perfectly even do not be surprised if you have issues.

Evenly worn part-worns are out there but you’ll have to be patient.

With all of the above factors you’ll be in a position to gauge if they are worth buying. Bear in mind you will need to pay to get the tyres fitted unless they are bought from a tyre dealer. That’s on top of petrol or delivery money too. It all adds up.

Don’t just try your local large tyre chain either. Do some searching online. Asda Tyres, Formula 1 and Black Circles all give competitive prices online and allow you to establish a ballpark.   New tyres may be cheaper than you think!

This is an interesting one. Over half the of the part-worn tyres being sold by tyre traders are illegal. Why? It is all down to a simple stamp. The stamp confirms that they meet the minimum standards set by the UK for being a part-worn tyre. That is that they have over 1.6mm of tread within 75% central region of the tyre tread in addition to being repaired correctly and with no other adverse deflects. These defects could include cuts and bulging.

If they haven’t been stamped part-worn have they even been inspected well.

We hopefully have a better idea of what we need from a tyre, and what to look out for. Finding the right part-worn tyre can be hard and it can be worth just jacking it in and buying a new tyre.

Hopefully you are not scared of buying part-worns but are more informed of what to look out for and not top be duped into buying what may initially look like a cheap option on the face of things.

Now, time to grab that value beer that has been sat at the bar for a few hours….