I would have thought that my tales of living with an M3 would have put a few people off! Did it? If not it is my duty to keep rambling on about how the first year of ownership with an E46 M3 can be!

However I can report that after the Evo Triangle trip April was actually going surprisingly well! The car was behaving and drive the best it ever had done under my ownership! The tramlining had completely gone, the car thanks to the Michelin tyres actually gripped in wet conditions very well and it was a joy to drive on back roads as much as it was on long motorway trips. But with a trip planned to Germany in the Eiffel region it was not a time to sit on my laurels.

Sure, the car had the Rear Axle Carrier Panel (RACP) reinforced with uprated bushes and new tyres all round and a general clean bill of health. But what about things like spare brake pads, oil and other consumables? It would be wise to take them, especially given how the car would be pushed to its limits! It was time to get ordering!

The first thing I would order and fit would be a power steering hose.  I had a hose made up by a known face in the industry with it being a very similar design to what BMW sell.  Suffice to say it did the job well and allowed me to change the PAS fluid at the same time.  Compared to the old hose the new item was a great improvement.

After extensive research and previous experience with brake pads I decided to go with the expensive but great Pagid RS29 fast road brake pads for the front. A Renault Clio 220 Trophy from Rent-A-Race-Car had these on when I went to the Nurburgring in October where they performed well! With the front pads sorted it was time to look to the rear brakes ; stock items were ordered from Euro Car Parts. The issue? They were from a 330i after looking up the part numbers more closely ; they would fit but the compound would be wrong. Had I known this earlier I would not have purchased these from ECP. However, with limited time I needed a backup if my rear brake pads died. As I learned previously at Silverstone the M3 if the DSC is left on can be very hard on the rear pads ; I managed to have them smoking there!). With a bottle of Super DOT 4 brake fluid thrown into the boot the car was ready on the parts side. Oh, and some Brexit number plates to make the car more Euro friendly when abroad:

Before this I had the alignment checked by BT Tyres in Rugby.  Ross has treated me well in the past and I knew the car would be in good hands.

All that was left to do was to clean the car, check the levels and the pressures, pack some tools just in case and then sort out myself. OK, may there was more to sort than I realised! A friend of mine in a Clio 172 cup also prepared in a similar fashion, but a chap in a Clio 220 Trophy? He just sat back, and seemed to think that we were fretting for his own pleasure! Or so it seemed. 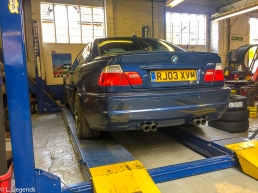 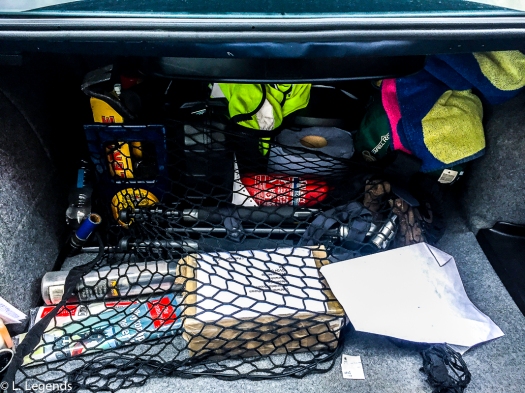 Then came the Monday morning. With no sleep at all and a 3am start we set out towards Folkstone. Much to my surprise the car went there without a hitch, despite me enjoying the derestricted Autobahns along the way! It was then time to sort out accommodation. My friends stayed at the superb Blaue Eke in Adenau found at this website while I was at a great appartment within Adenau called Haus Sonja ; it had plenty of facilities and was great value. While my car was fine, Dev’s would require some attention. This would only be changing the wheels over. While three of them were relatively simple one was a nightmare! Even a 2 foot breaker bar struggled to break the nuts off! But we got there! Mechanics. You have to love them. With the wheels now tightened up with a torque wrench at least they would no longer be such a chore to remove.

After a meal later on that night it would be time to hit the Green Hell. So, to put it another way, I am in a car with north of 300BHP, with a Marmite gearbox, and forecasted rain.  How bad could it be?