For the first time ever with the MGB project it looked like I was finally making progress!  I finally had a plan, a tangible one at that, my painter was keen and being local to him, communication could be kept much better between the pair of us!  He had been given £400s worth of Smith & Deakin’s finest panels.  But as you know from the previous post that was not the case!

Since we’d be salvaging the original wings as a base for the arches to be grafted on my painter and I agreed on that!  However, he’d need some wheels quickly so as to know how to mount the arches but also deal with the inner items!

With that in mind, I tried searching and search for a cheap set of 8J wide wheels in around 14 or 15″ diameter.  Given that the MGB has a PCD of 4 x 114.3mm such wheels are not common now even with banding taking off!  You can imagine what my situation was like in 2005!  It was poor!  I really did not want to spend a fortune on wheels.  But sometimes you have to swallow your pride and just go with it!

With that done there was nothing left for me to do except pop into the painter’s a few times and see how things were going!  Now that I had the parts these bits progressed very well suddenly! 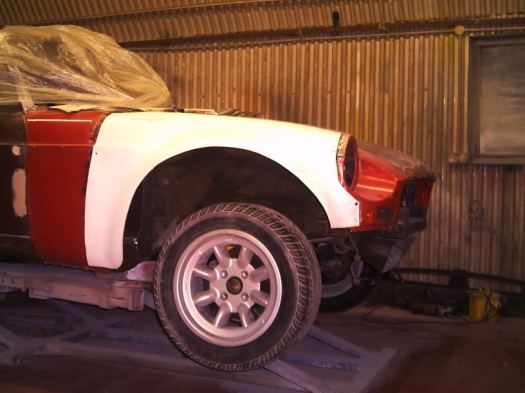 Firstly, the wings were offered up.  Next, the car was cut up for it to accept the wings.  Would this please most MGB owners?  Somehow I doubt it.  But when the result was looking to be finally taking shape I could not really care what they thought!  Finally this car looked like it may one day see the road again!

What he had done was fillet out the inner wheel arches towards the wings and then have that as a strengthener.  However, having a fibreglass to metal join is never an easy task to undertake: just ask any Ford Racing Puma owner about that!  That is why the car had a bit of filler on it so as to disguise the join!

One day it really did look like it was a car again!  It was great news for me, the painter, and all involved!  The car was now only weeks away from seeing paint thankfully!

The panel gaps were spot on, any visual sign that the wings and arches were two different materials looked like they would be gone once the car to paint and all was looking superb.  However, it was not to be.

I remember being at university at the time when I got a phonecall from the painter’s solicitors.  The news was something I never thought I would expect, and something I really didn’t take in for some time!  After all, the painter soon became a friend of mine and was a great pillar of the community, to both the Sikhs in Leamington Spa as well as many of the VW folk!  I say was as he had passed away!  It has been said that 2 pack paint doesn’t do painters any good and this was a stark reminder that the paint fumes were not a force to reckoned with!  Unlike radiation it may have had a smell and taste.  The fumes however were invisible and deadly even with precautions taken!

Why stop the project again?  But also, why take one of the good guys away in his 50s?  That’s no way for such a bloke like him to go!  With that in mind I got the car out of the shop ASAP for his family’s sake and yet again I had the car back on the driveway, but not as expected.  I almost lost the vision for the car again, but worse still I had lost a friend!  Just what would be the thing to do now?  Would the project stall again or would it be kickstarted once more?