I left you folks at the edge of your seat wondering what was happening with my engine. The truth is I was anxious myself! I have worked on the car almost solely over the years, with it only seeing garages for an MOT, manufacturer recalls as well as Rear Axle Carrier Panel (RACP) reinforcement. ETA were considered for the big end bearings but getting to Brands Hatch on weekdays only can be a royal pain.

I’ll be honest, I wanted the phone to ring ASAP with good news after that!

So there I was, sat at work worrying about the engine. I was hoping that welding a bolt onto the bolt would free it. In short, it did! My relief, however, did not come until I came back home and I had a text stating the car was ready to be picked up! Without hesitating, I arranged some transport at short notice and got down to Autobahn. There Rob talked me through what he had done. Then he showed me partly what I wanted to know; the state of the bearings that came out. With 138k on the clock were they beyond gone? The answer? 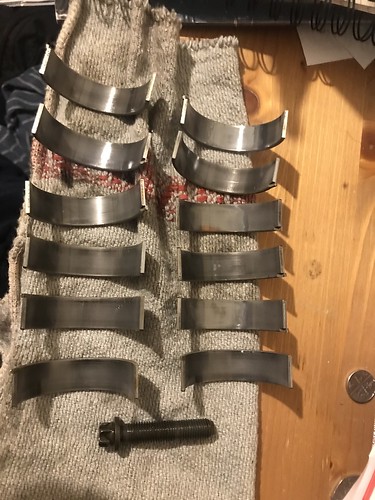 One was(ish) on the limit with some copper showing but the rest were not too terrible. A few were scuffed as you can tell. But compared to others I have seen removed with less mileage mine were in a pretty decent state; many after even 70k generally have some copper showing on all of the shells! Some would argue I should have left them in! But at least I have the confidence to drive my M3 as intended :).

Maybe this maintenance has had the wrong effect on me. Only time will tell, however.