Last Sunday was an interesting one. For me, I somehow manage to complete all of my Christmas shopping. It was also the day I strangely had a delivery from DPD for my Citroen 2CV! It would also be strange as I wouldn’t take my M3 to a BMW event, but instead hitched a ride in a friend’s Mitsubishi 3000 GT Turbo. I know! Going along to a BMW event, not only with you not taking your own BMW, but going in a Japanese car! Which BMW was this I hear you ask? It was none other than the well renowned Pistonheads Sunday Service at BMW’s Headquarters in Farnborough.

First thing was first however. After squeezing myself into the small confines of the GTO, we’d then take a short stroll down the M40 from Leamington Spa, before inevitably, hitting the M25. Thankfully, that wasn’t as painful as expected!

Upon getting down to the Sunday Service though, things were strange! Compared to last year’s BMW Sunday Service, this was a very quiet affair? Was it down to all of the last minute Christmas shopping, the fact that it was freezing outside, maybe people were hungover from a work’s do, or maybe simply, they were tightening their belts before Christmas. Whatever the reason was, there was still plenty to admire around the area, and that’s starting with the car park too! It certainly didn’t stop Joe Achilles coming down to show off his new toy in the form of an M2 Competition!

Yes, the carpark was inevitably full of BMWs, but this would not a one horse event. No sir! Alfas, a few Americans graced the place, as did some British tin! No, no the BINI tin, older than that! It was certainly great to have some variety about!

Yes, the carpark was inevitably full of BMWs, but this would not a one horse event. No sir! Alfas, a few Americans graced the place, as did some British tin! No, no the BINI tin, older than that! It was certainly great to have some variety about!

So, I know what you are saying. It’s a BMW meet, but there are not many BMWs? Fear not, there were plenty!

There were some lovely E86 Z4s about as well as a few other oddities, including a lovely 840i and even a Z3 M Coupe! Interestingly, E46 M3s were ever popular, but considering the clientele of Pistonheads is normally one for hating cars that don’t have 3 pedals a few more SMG M3s were about the place, more than I had seen before. Have they become more acceptable within the fraternity or was it just a coincidence? Who knows!

Interesting, there was a rather strange M4 about too! A DTM Champion edition! I’d neither heard or seen one before! But what are they? An M4 GTS with fancy graphics, or a true celebration of BMW claiming the DTM’s Drivers’ Champion win for 2018? For me, marketing exercise or not, I do quite like them! While being a hardcore M4, it does also have that great Jahre livery BMW has become known for!

Also great was to see this superb BMW E30 M3. This example has been owned by Mark Brown, and is a real credit to his vision and philosophy about owning BMWs. While this M3 has seen enough issues to test even the most calm BMW enthusiast with cash to burn, Mark persisted with this build and it was great to see the fruits of his labour pay off! It is a shame it is no longer his but I do understand that it is now in good hands.

So, that’s enough about the old stuff! What about what is to come for BMW? Well, those of us there would be in for a treat, or so we thought:

What’s that? The new 8 Series? No. Think again! That ladies and gentlemen is the new Z4! Yup, the very same car that will be the Supra. Despite the praise it received for its concept styling, I can’t say I was initially taken with this awkard view. Maybe things would improve inside?

As always, as BMW has come to do recently, they have kept this simple. Simple works, simple is good and more important, simple is familiar. This, I am glad to say is the redeeming feature of the Z4. This interior design seems to have also followed on in the new 3 and 8-series cars, in addition to the X5! Simpler, cleaner and possibly better, but of course, time will tell there!

If you thought the Z4 was now a large car you’d be right! So how big can the new 8 series be? Honestly? Fairly large:

It may not have the presence of the original E31, but you have to admit, it’s not a bad looking thing, coming from the Z4!

This however would not just be a meet showcasing BMWs, oh no! BMW would use this opportunity to show the newly released John Cooper Works, complete with the full historic lineage behind it, right from the R53 Cooper S Works GP1, the car that started off the exteme Minis game:

Would there be a car of the meet for me? Definitely. That was simple:

This may well be a predictable choice, but speak of this quietly, most AC Cobra reps don’t really do anything for me! This one however, was very nicely finished! With careful attention to detail with the shifter, the visible oil cooler lines and even the polished fans, the whole thing certainly seem more equisite in comparison to most Cobra replicas I have seen! Now, I wonder if he will swap an E46 M3 for it…

For some however, the day was not so good. Take this lovely 997 Carrera S

With the right tyres, stance and dare I say spoiler, this really was a lovely car! However, despite the looks and the attention he got, he would soon be getting even more attention! Why? A flat battery would spoil his day:

Like myself, and a few friends I know, it seemed he bought a Bosch S5 battery and learned that they really don’t like going even slightly flat! Leave an S5 battery to go flat at your peril! Or better still, avoid buying one if you can!

So all in, it was a quiet, but quite a great day for it! Sure, the free sarnies were no there like last year, but we all did get more time to sit in the new cars and admire them for longer. Like all good things, every cloud has a Silver lining, and this Sunday Service was certainly no different here!

There I have been, touring the place in my W124. I know what you’re thinking. The poor M3 is in the unit, doing sod all, despite it being sunny outside with me sweating like mental in a non-AC’d W124! Up until a week ago you were right!

BUT, prior to it coming out I did actually do some rectification. What was it this time? The VANOS. Earlier on, some of you may recollect how I changed the pressure regulator seals along with the VANOS filter, changed the solenoid seals, cleaned out the valve body and also changed the solenoid pack, since mine seemed to be faulty. But what I forgot to say was that when I took the pressure regulator out for the VANOS refurbishment one of the seals, despite being a genuine BMW seal and having a total of 10,000 miles on it, was going square yet again!

It was fair to say that I wasn’t best pleased. It seemed that their normal rubber couldn’t take the temperatures. But since I had a couple of Viton seals, courtesy of Hack Engineering I figured now was the time to fit them. This involved cutting off the old seal. Note how square the black seal has become: 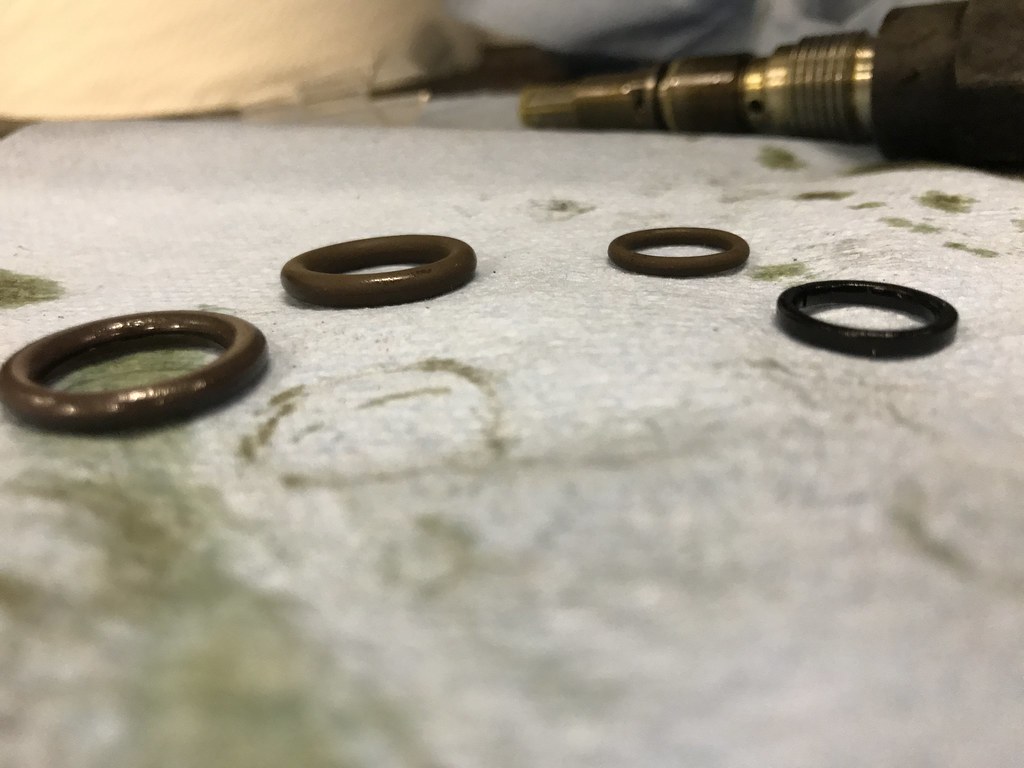 With the new Viton items the whole assembly was prelubricated and refited. Has it made a difference? Not really but it will be interesting to see how these new items fare.

It’s just as well I got around to this as I would take the car to MotorPunk’s inaugral event. Now that was a great day out!