Well, this update has been a long time coming! But, like many a BL worker, I figured I’d have a few cups of tea, and then a few more beers before I came to writing the reply! So, what did happen with my MGB?

In the first MOT the car had seen for almost 10 years, it failed. This was hardly a surprise! The failures comprised of:

Not a terrible list but it could have been better! The biggest worry of mine was the brake hoses! Little did I know, they would be a very easy fix!

One issue with a car being a slow burner over the years is the ability to lose parts along the way! This is what had happened to the brake, in addition to my inexperience. The brakes were missing P Clips which held the hoses to the crossmember. Some self-screwing nuts and P-Clips later, and the hoses were fine! To alleviate the twisting of the hoses, I ended up adjusting the hoses so they wouldn’t twist quite so badly. With this done, the car finally had a clean ticket for the first time in years!

OK, it was far from finished, but God, it was actually on the road!

Naturally, some things did jump out at me!

The biggest issue with all of the above was the cash, especially the paintjob. Back then, a very good MGB was worth about £4000 on a good day, and Sebring conversions tended to fall into two very distinctive camps. Either cars with very appalling bodykits with wheels that didn’t suit the car at all, or super-pro cars which had £10,000s spent on them, not just thousands. Maybe just under £10,000 would have got what I wanted. But back then, £2.5k was far too much for me to commit to a paintjob on a rubber bumper ‘B! Madness or reality kicking in?

What I did do, however, was source some lovely Corbeau bucket seats. At £150 for the pair secondhand they were cheap, and yes I still winced at that price, even back in 2011! As for the springs, well, I went all out, as the ass-up-in-the-air look just was not cutting it! 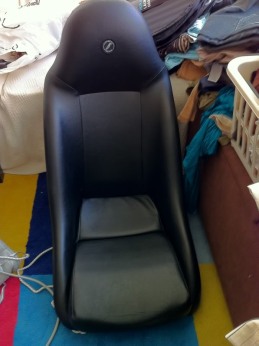 As a result, a further £200 went towards MG Motorsport, who sold me some SuperFlex bushes for the leaf springs, and a set of decambered springs. Yet again, people warned me about how the car would be ruined! They probably had a point there, as I almost broke my hand as I undid the leaf spring with the axle stand under the axle and not the chassis; I just didn’t trust the chassis! Stupid in hindsight I know! But we all have to learn the hard way! How I didn’t break my hand to this day is unknown!

But back to the car. How would it drive and behind on 8J x 15″ wheels on sorted, or dangerous suspension, depending on who you talk to?

The truth? I would be in for quite a surprise the next time I drove the car out.