It’s funny. I never thought I would ever see myself going to EBC for any reason at all; I never had a reason to. That was until two weeks ago when something would change that. The small announcement make by two blokes called David Freiburger & Steve Dulcich, stating that they would be hosting a small show at EBC in Northampton:

There were a few more crumbs dropped along the way but not much at all.

There was only one thing for me to do. Turn up. Given my crazily busy Saturday it was nice to have more a chilled day. Which is why I got up and ready to be there for 9am, an hour earlier: I had visions of parking miles away! But to be fair all was well and it was well time, especially since I got to meet up with Dean and check out what the fuss was about his Dodge Dart. This car is also for sale for £6500: Not bad for a quirky V8. Who said roadworthy American motoring was extortionate? 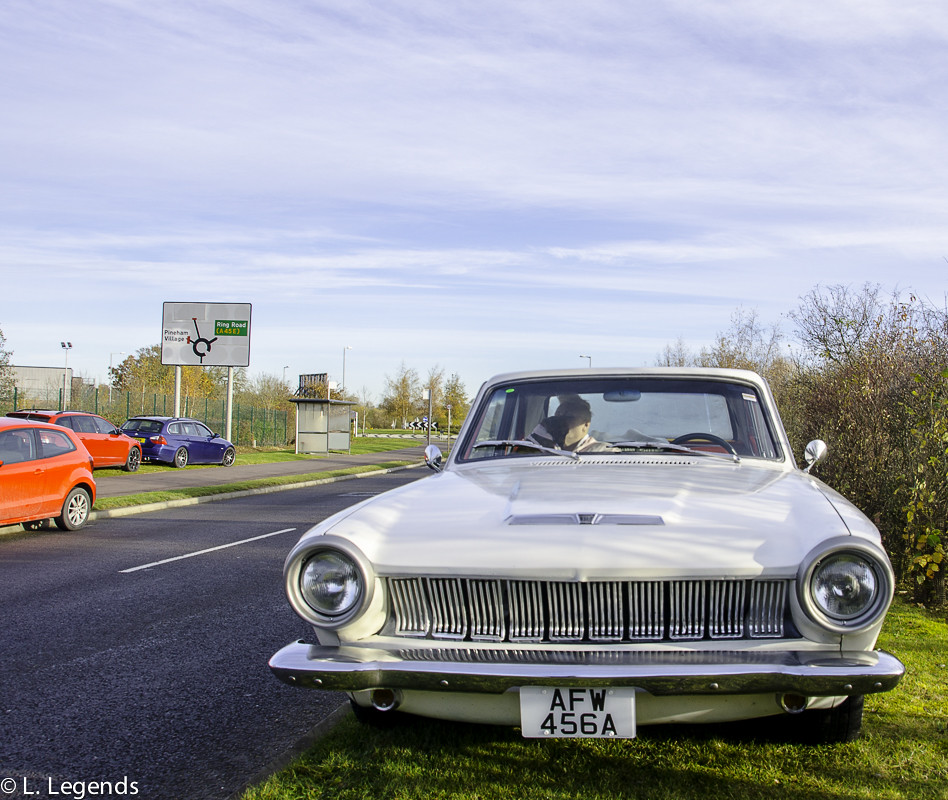 Coming along early however was no bad thing. I got to see a few familiar faces.  It’s always good to meet a very familiar face of Retro-Rides. 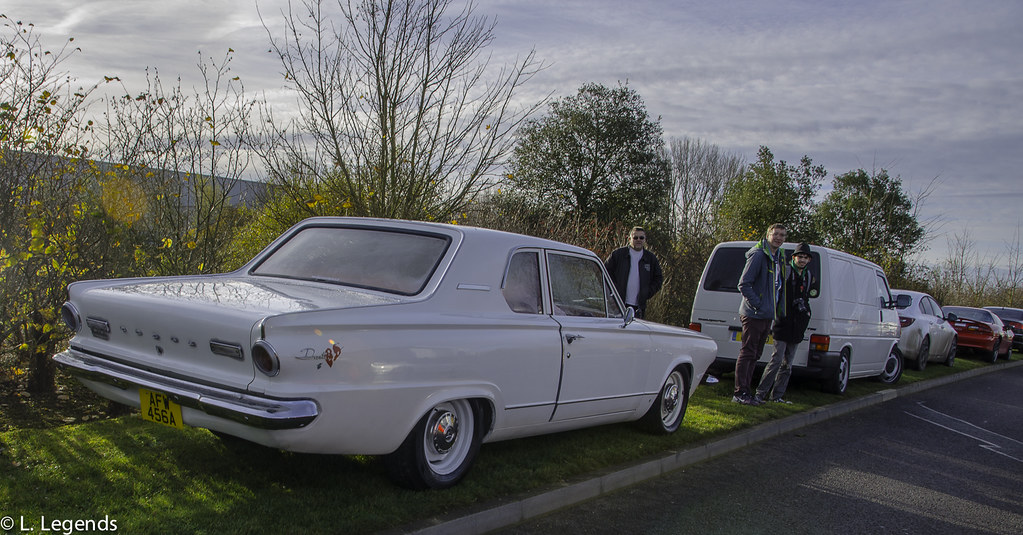 Since EBC stuck rigorously to only opening their doors at 10am we decided to have a scoot around the area surrounding EBC to see what cars were about. After all, a capped 200 car limit isn’t a lot of space within EBC’s grounds.

There was plenty of interesting stuff about mind you, and variety too! When have you seen a Dart, a clean Volvo 244 and a Nova all in the same place? 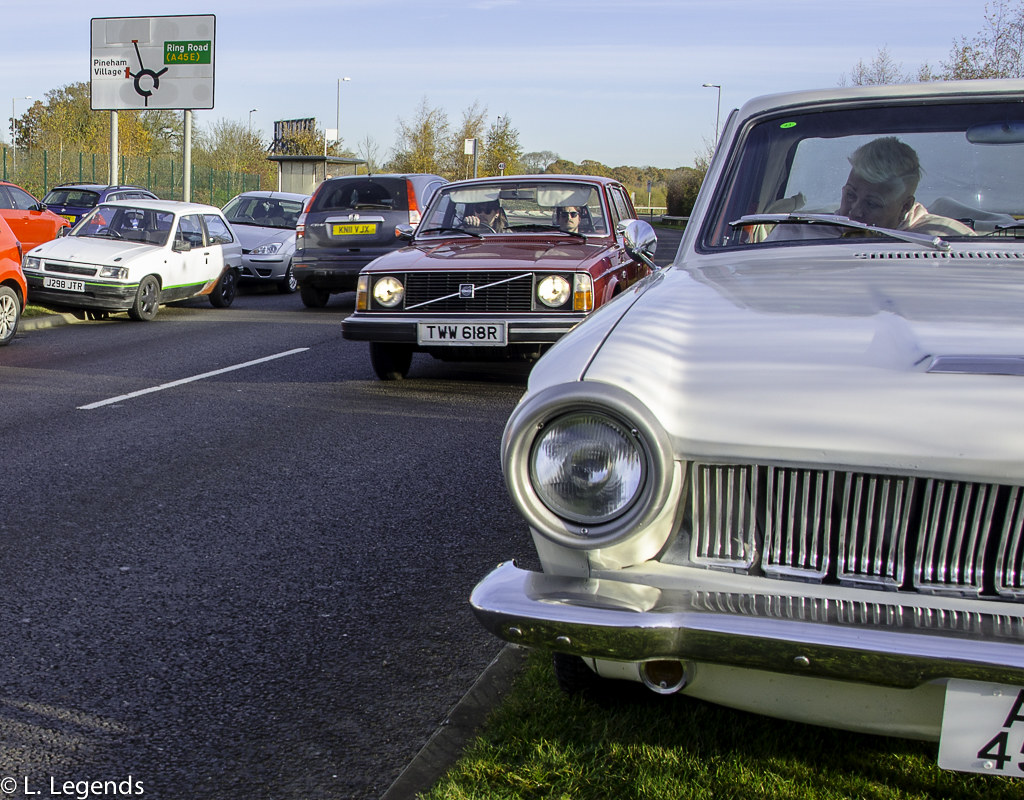 This Volvo was interesting: The queue was too that was already building up at the gates! 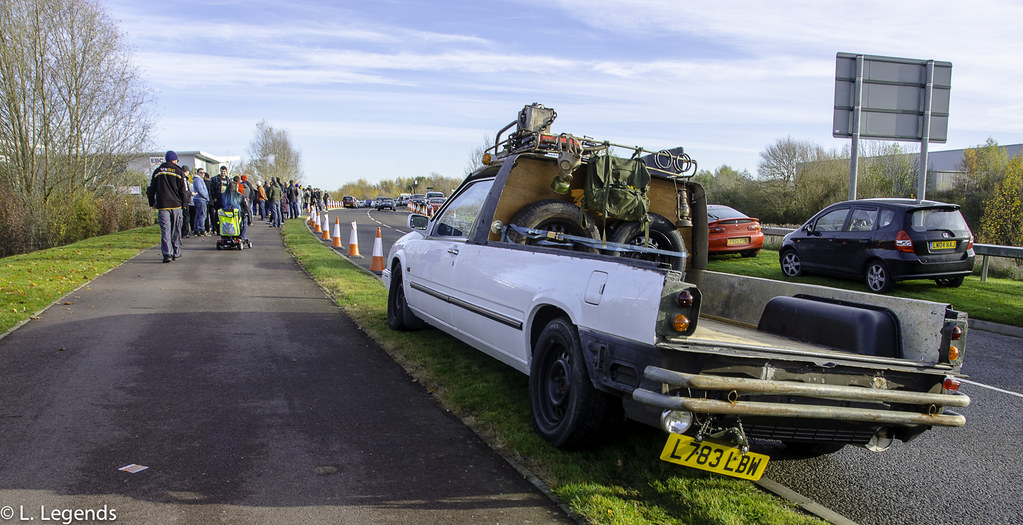 There was plenty of dedication from this Mini owner. Why? He took his bonnet off in order to get it signed by David Freiburger. More on that later… 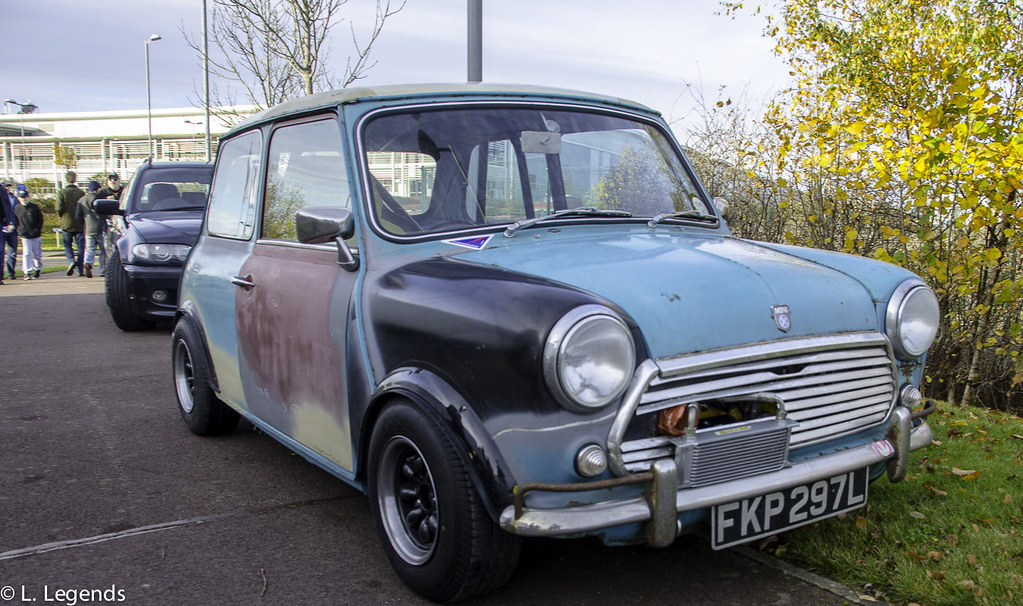 The Roadkill theme was strong for sure! Just take this tidy Orion!  If it was any more obvious it could almost be the UK promotional car, with the Roadkill spirit showing. 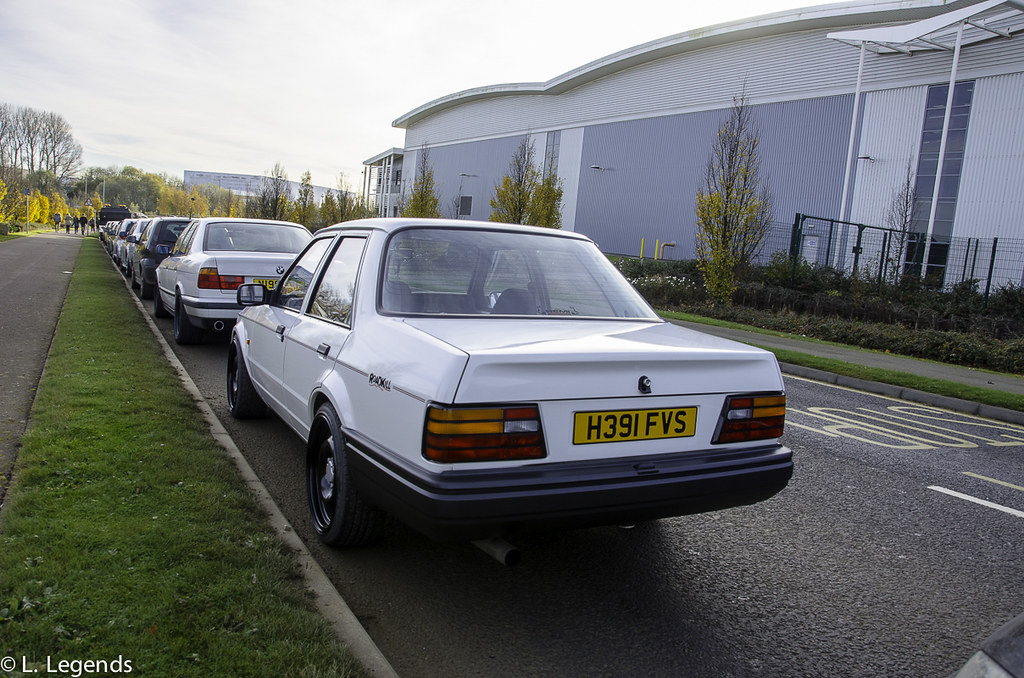 Despite the eccentric and Roadkill themed cars, a clean looking Amazon made it down: 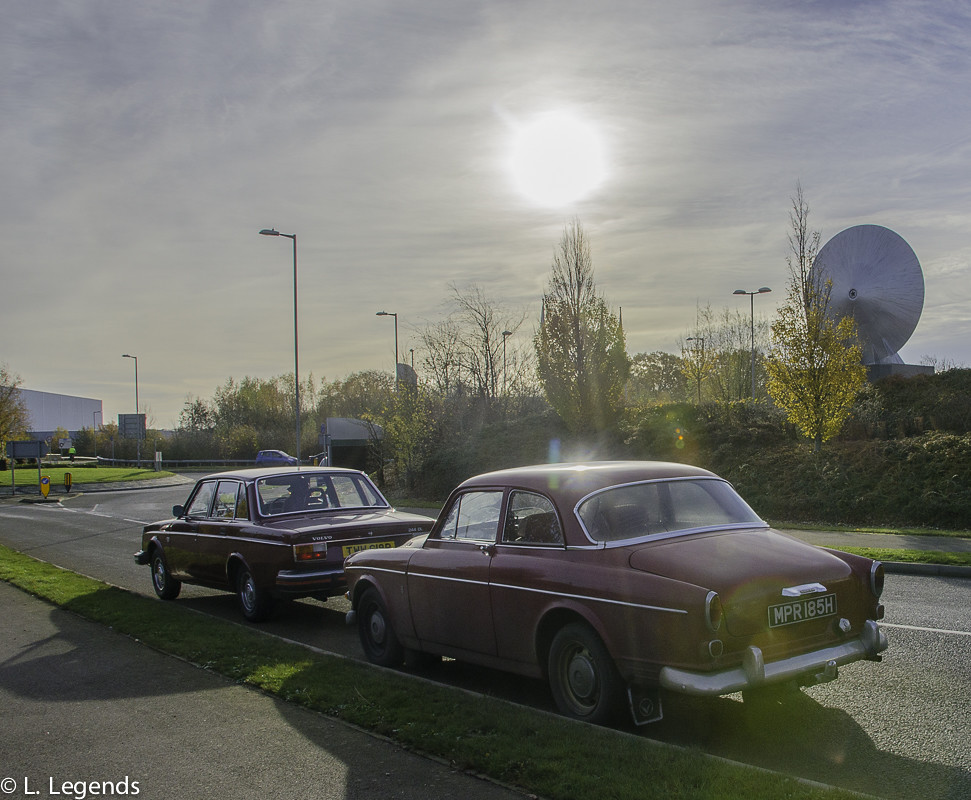 By the time we had our walk around the queue had grown. This was just before we were let in! Did someone say underestimate? 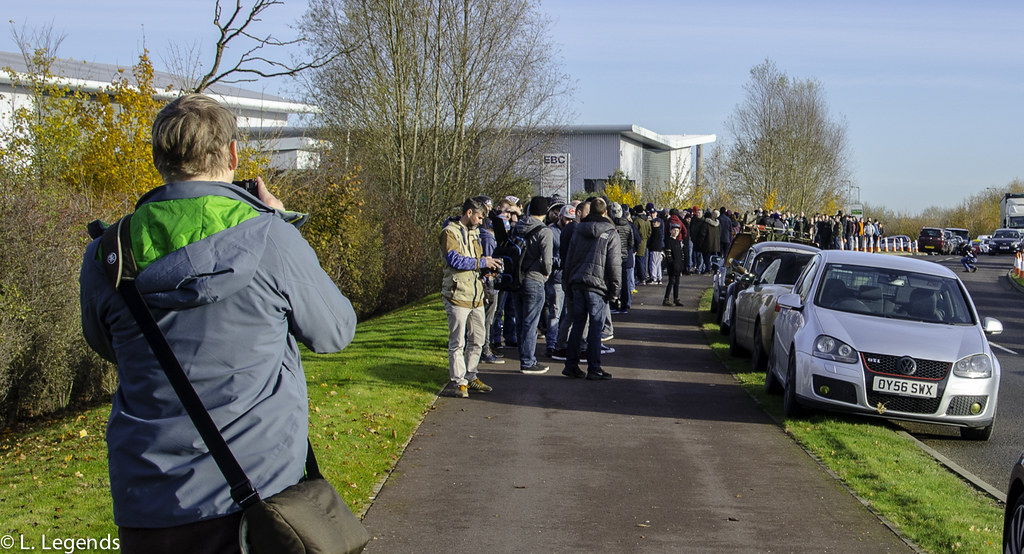 Before we knew it, we were in. And truth be told it was worth the wait. The hour long Q&A that the duo did certainly wasn’t lacking people. It was a very down-to-earth vibe, even with those who got the brief chance to meet them. 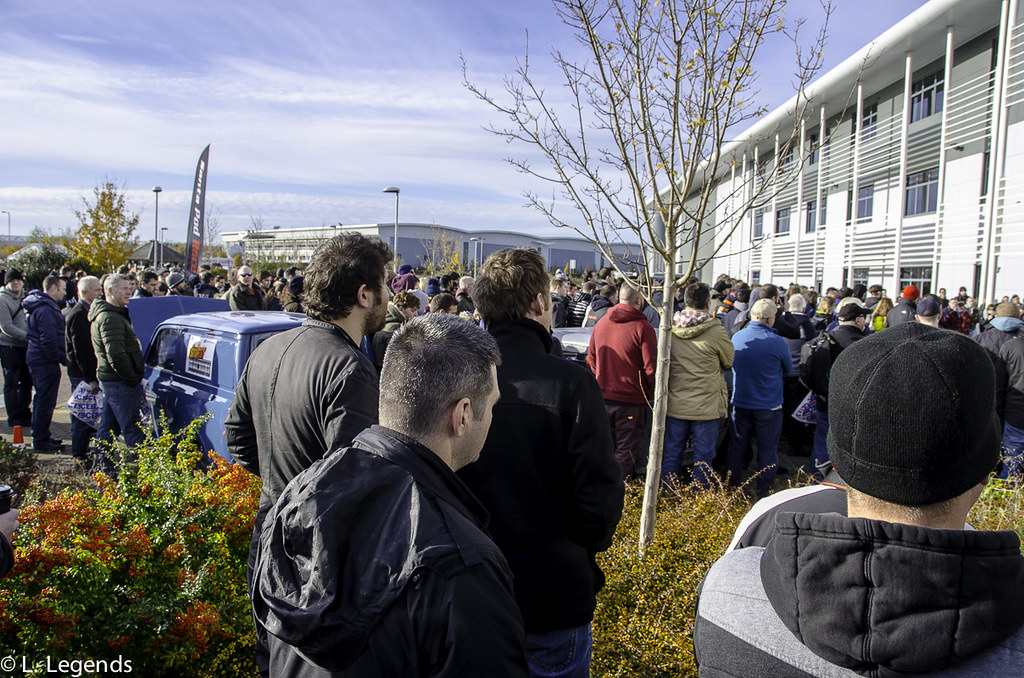 Now for the bit your have been waiting for. The cars. There were familiar Fords about: 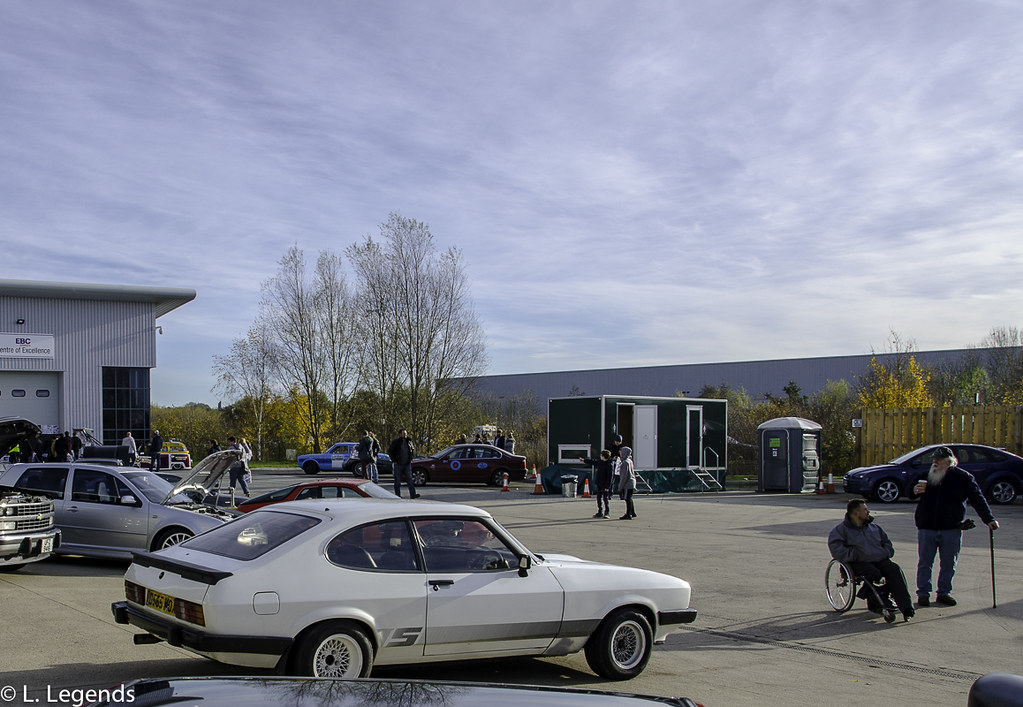 German and Scandinavian machinery was there too: 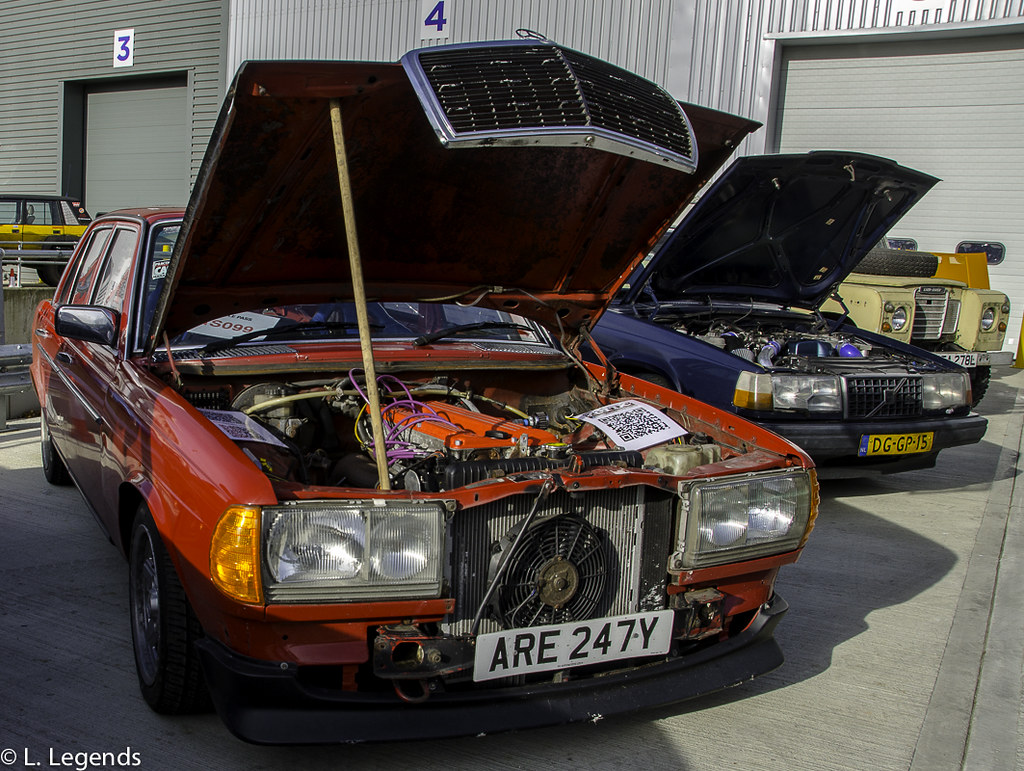 The Volvo 960 looked to be running a Toyota 2JZ engine with the Mercedes W123 being on throttle bodies using a later twin cam engine: 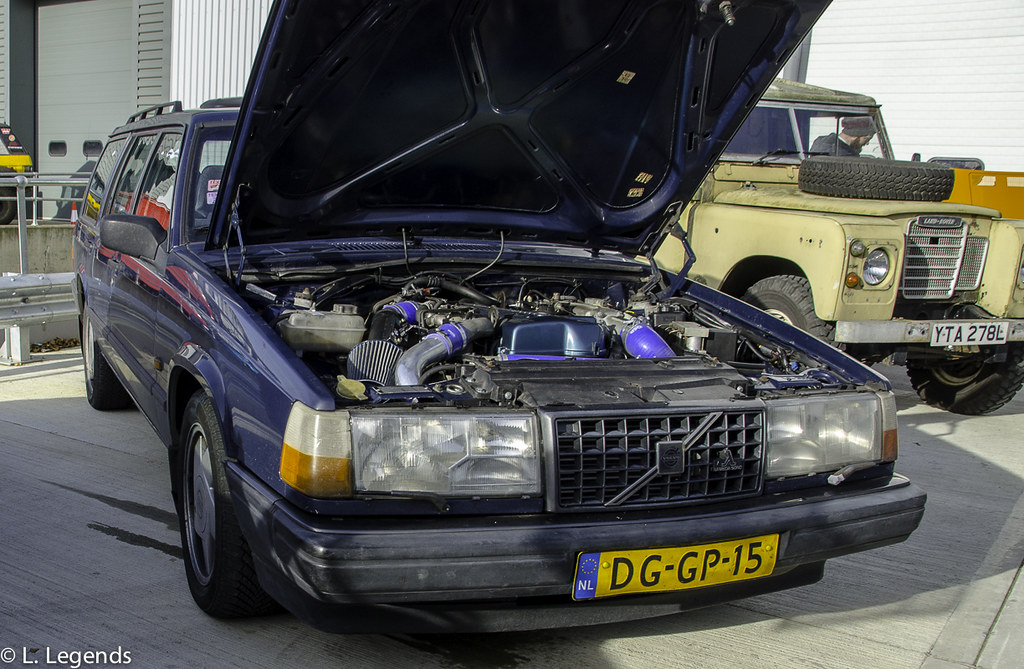 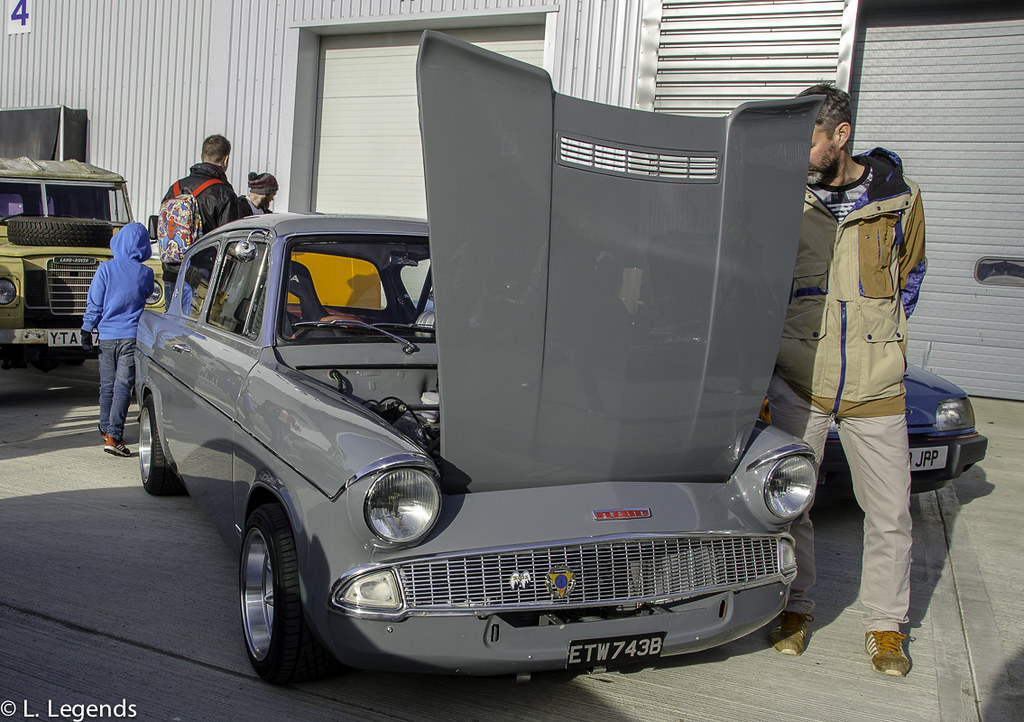 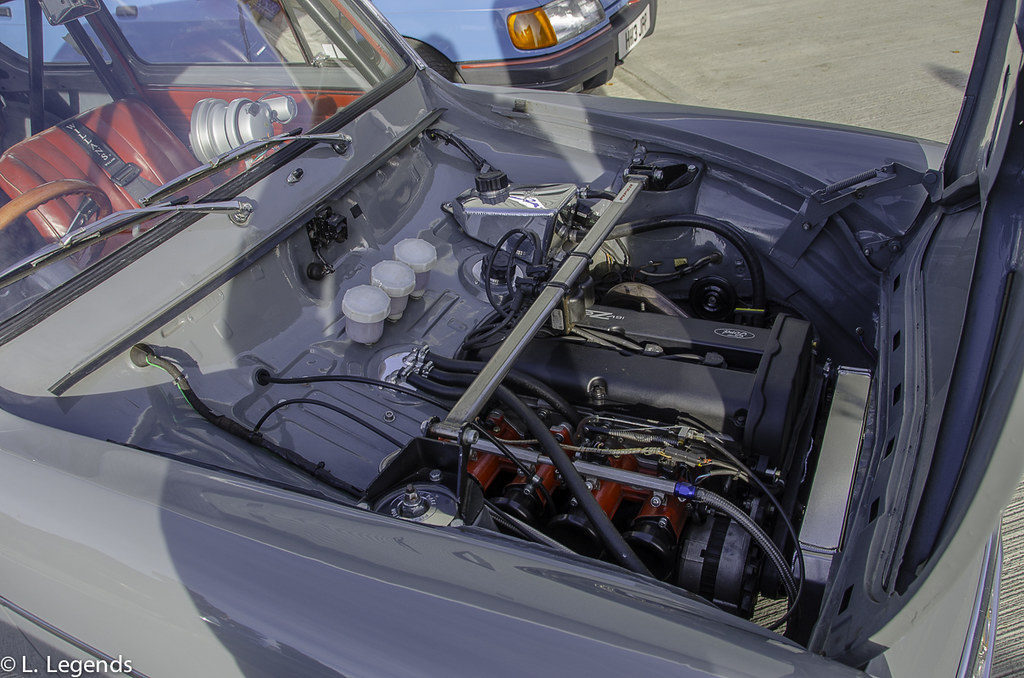 The MX-5 Rear Wheel Drive Clubman. Or rather the MX-5 with a Clubman body ;): 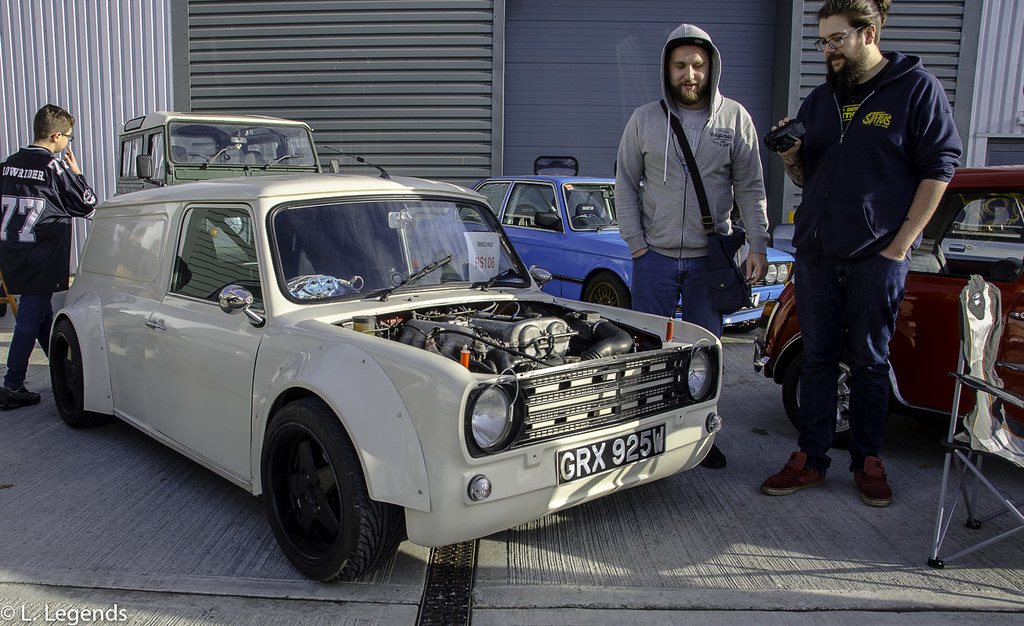 Amazingly, that crowd was still present around the Engine Masters gang an hour after they started their question and answers session.  The end did not seem to be in sight with the audience absorbing the duo’s responses like a sponge: 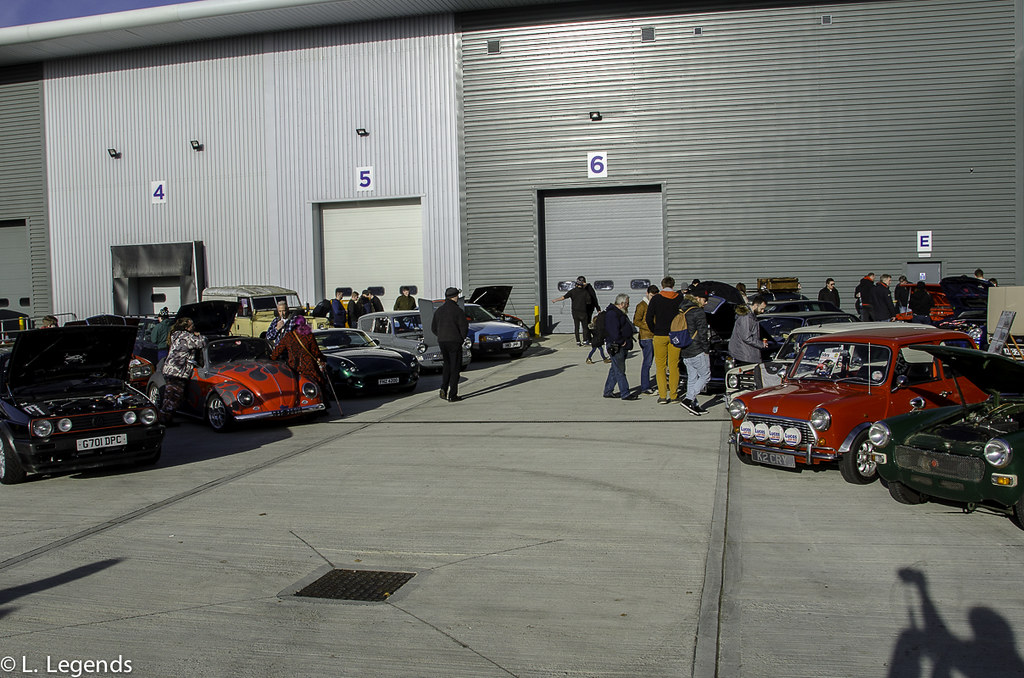 As always Pipey McGraw’s triple rotor Wankel engined Jaguar E-Type was met with a mixed reception.  However, the controversy did not stop there. 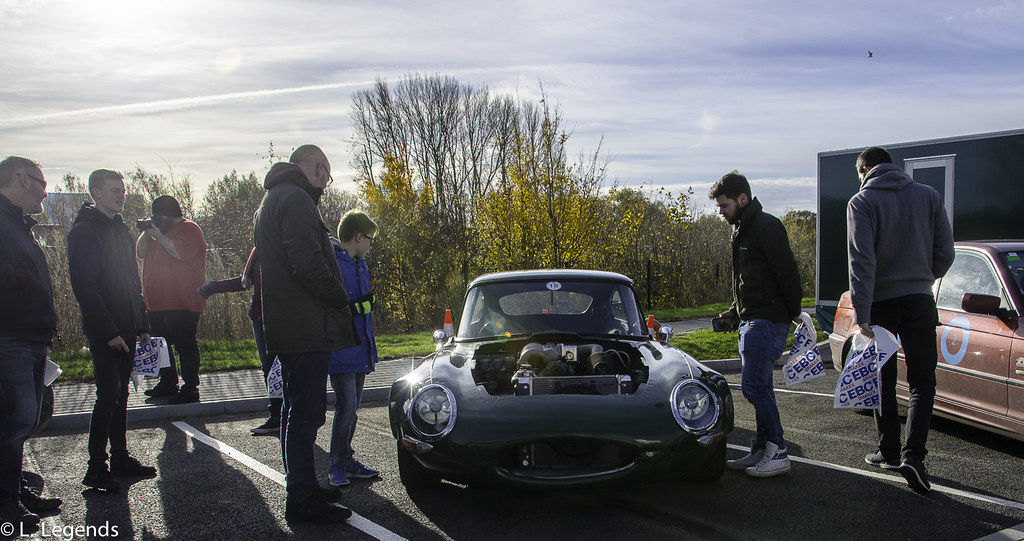 What was met with an even more mixed emotions was the Dodge Charger.  This was down to the car having been fettled with by Diesel Pump UK.  But what would a diesel tuning outfit want with a Dodge Charger I hear you ask?  That’s simple.  This one was a sporting an increasingly popular engine swap ; a Mercedes OM606 Turbo Diesel engine as found in W210 Mercedes E-Classes.  Except this one was churning out a lot more power ; around 750BHP.

There was variety between marques too.  Take these two Fords.  One is a relatively standard car.  The Capri, not so much: 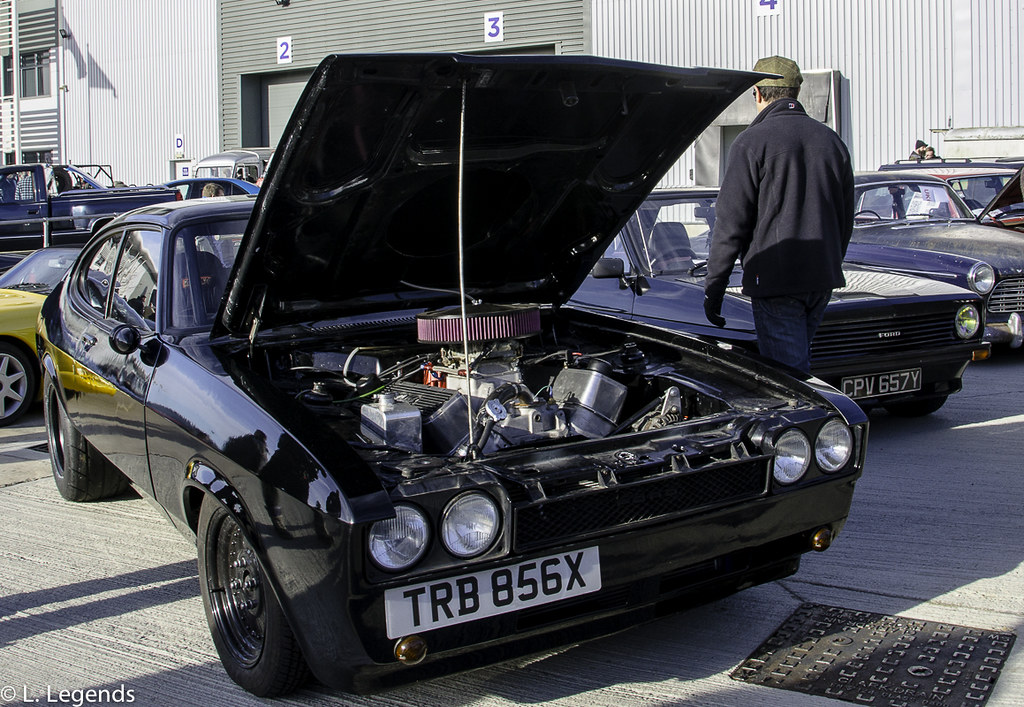 Unsurprisingly for the US hosts the American theme was certainly strong over here.  It was not however to say that the few Japanese cars couldn’t steal part of the limelight: 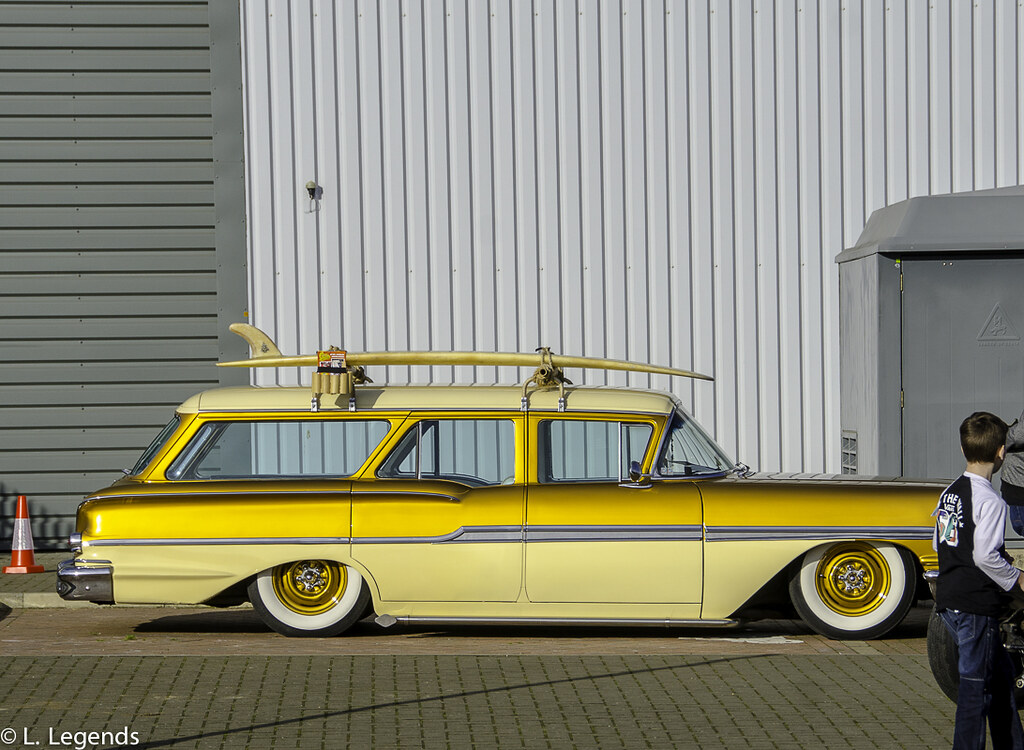 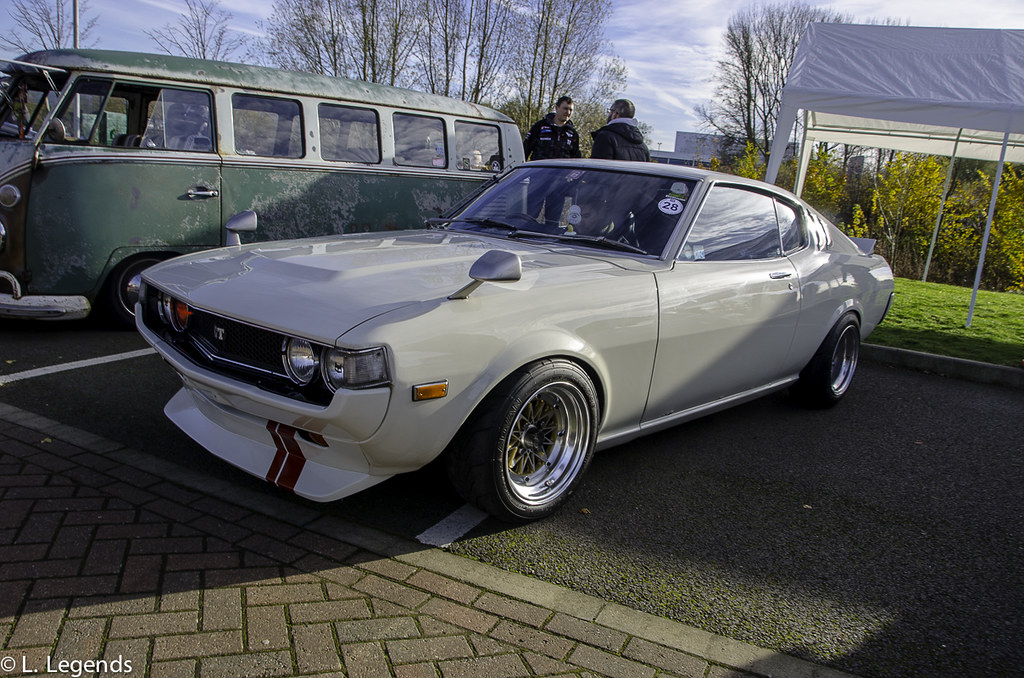 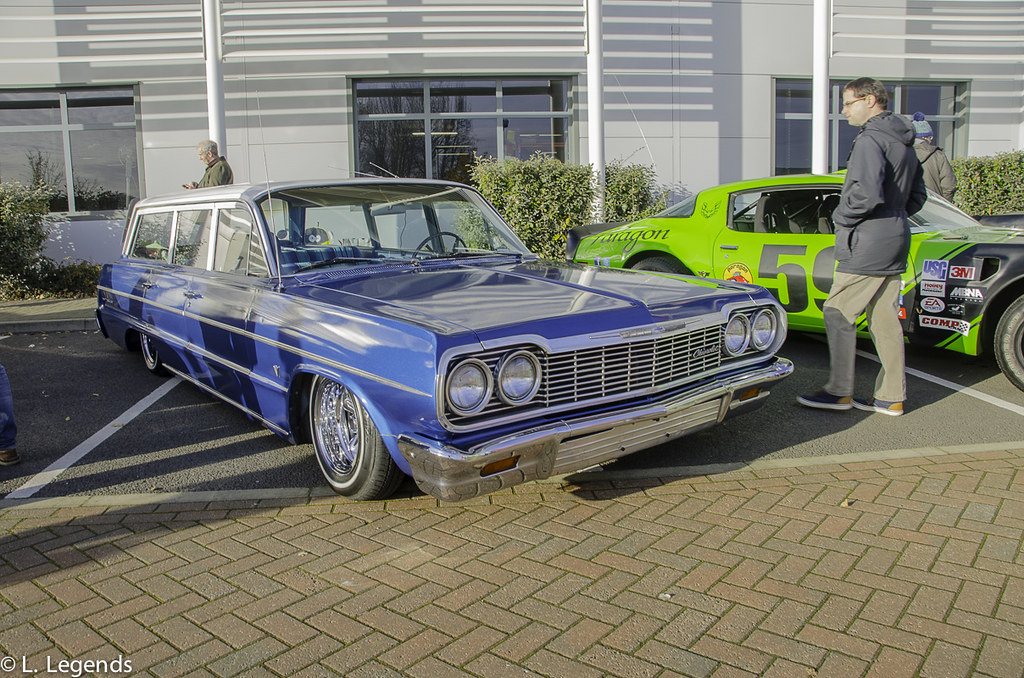 If anyone deserves a medal at the show it’s these two. David and Steve spent the entire day chatting briefly to people and signing autographs. This includes the autograph on a Mini Bonnet. Yes, the very same one that was at the start of this post. How many people were waiting?  A lot. 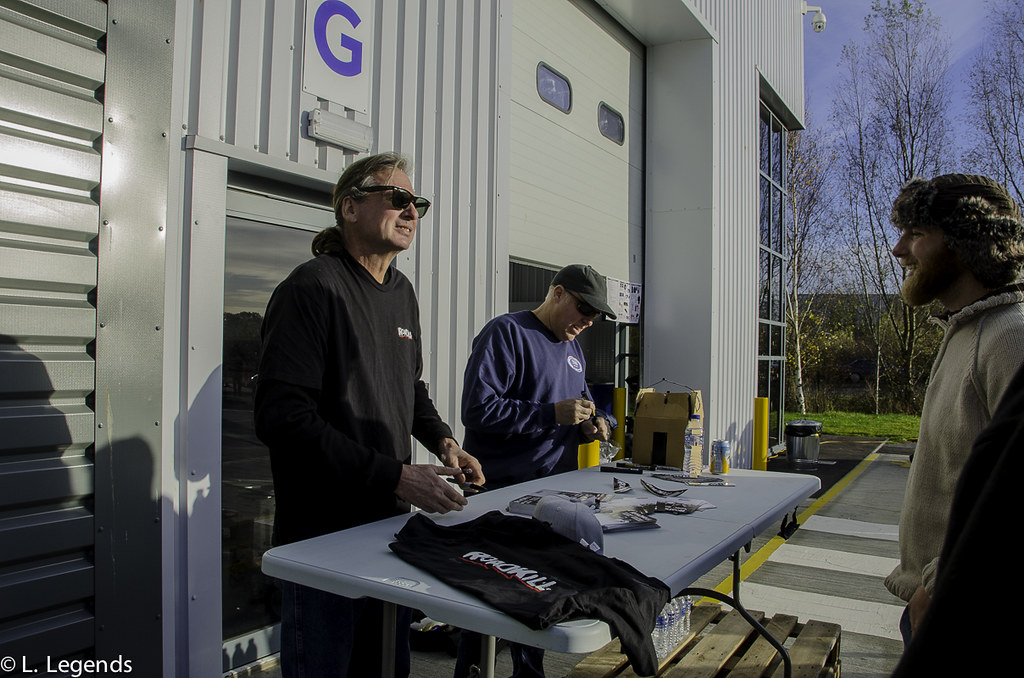 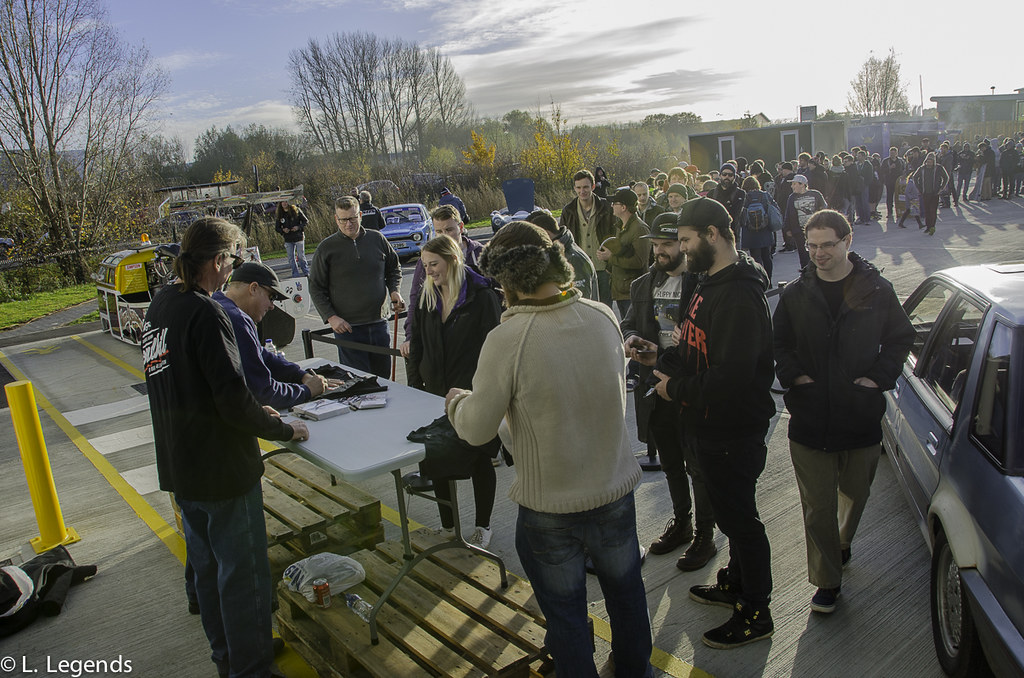 This rat-rod won car of the show. Not just down to its power plant or overall vibe but also for its backstory, as told by someone who knows Rogan, his brother who was the architect behind the project:

The rat rod was built as an after-school STEM project by some lads at a boarding school just outside Stourbridge, for the disabled brother of Rogan, the leader of the project. They started it when they were about 15 and they’re around 18 now I believe. It’s been down the track at Shakespeare County Raceway a few times, and also on display at Coventry Motor Museum. The looks tend to split opinion but you can’t deny it has an impressive backstory.

As a result the access was made much easier but also hand controls added in order to use it. As for the power plant it was a different take on a used ‘rodder’s engine: 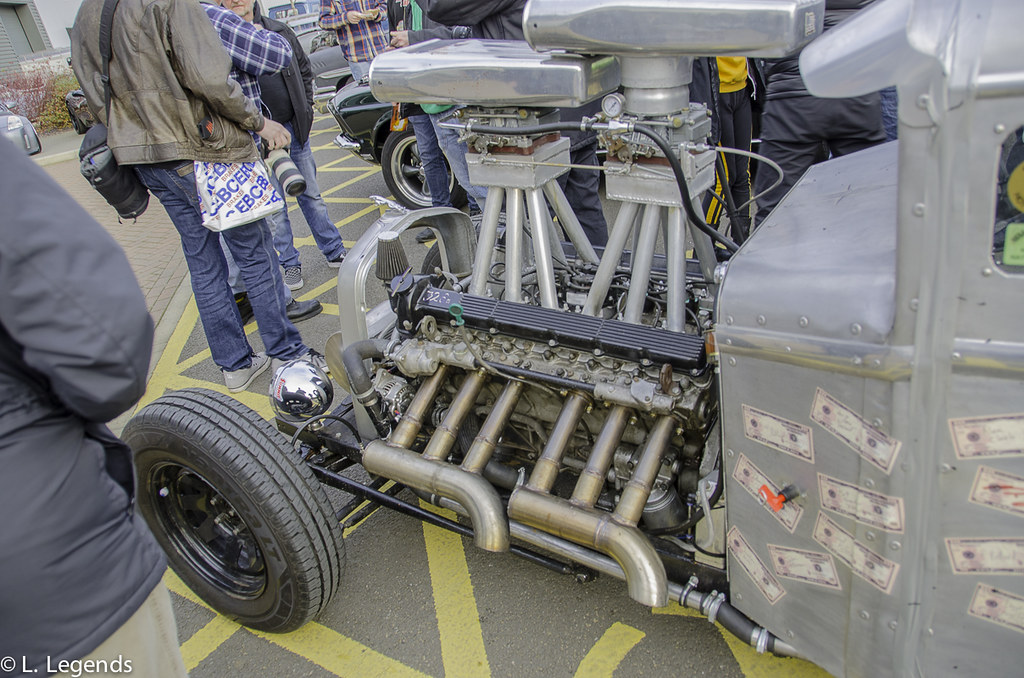 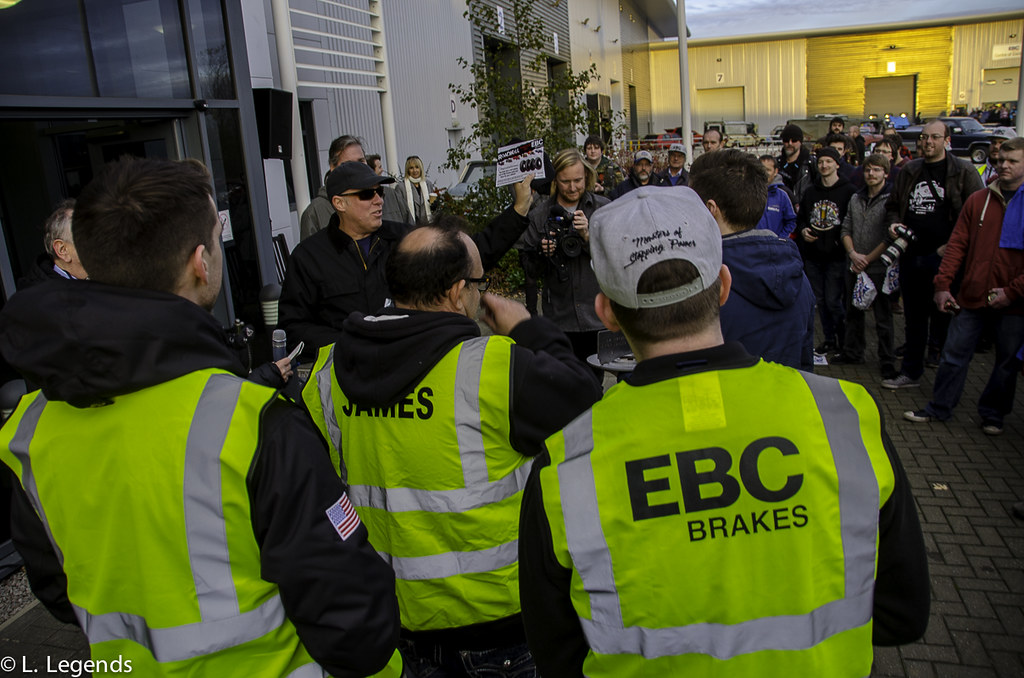 Only towards the end of the day did the queue for the signatures before to ebb away: 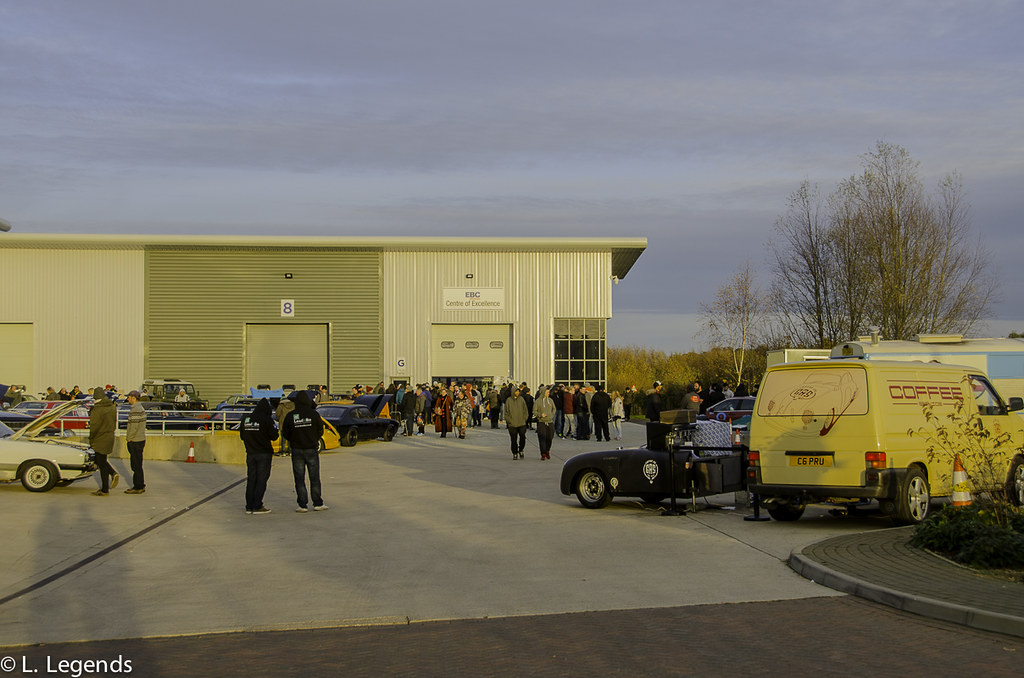 As a treat I also got to chat to Jeff Lutz. Indeed, the same bloke who has done all sorts of drag racing! For someone well known in the drag scene (no, not that one!) he was a very genuine and levelheaded bloke. It was a real pleasure to chat to him. Fair play for him coming over as well and mingling in with the crowds:

But again, a lot of props to David & Steve for finally coming over but also for signing stuff for the entire day! Elena was a great sport throughout the day dealing with a number of things that occur at such shows and was a great host.

Were there not enough pictures here for you?  Fear not.  There are plenty more over here which should keep you occupied for some time.