With the end of the holiday coming up we knew the drill. Wake up, clean up, followed by your typical continental breakfast before starting on the final leg. Oh, and admiring the receptionist while you are at it. The routine will sound familiar to many of you. Of course, it would have been nice if this was the case. It would be a case of being so close but so far.

Before we left however, I did come across this rarity!  You have to love the old Renaults: 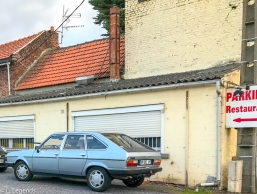 But there was no time to waste.  We had to get a move on!  The train would not wait for us after all! 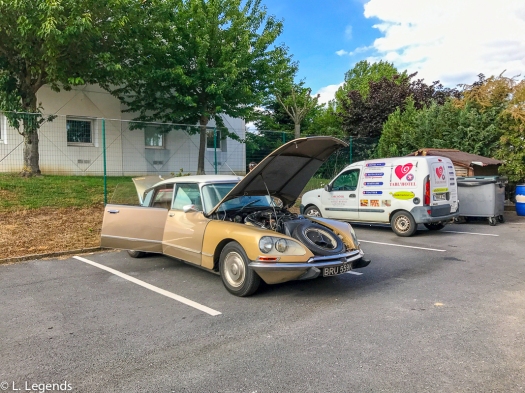 After travelling over 900 miles in the superb Citroen the stress of being dormant for so long was beginning to show. Yup, that clonking from the driveshafts off load was showing no signs of getting quieter. Although the car was actually fine at motorway speeds on the smooth French toll roads.   If you ask me you wonder if the car didn’t want to leave France! After all, this example had been imported to the UK in 2012 with it now being back on home soil.  However, it didn’t stop the car getting plenty of attention.

It certainly was getting a lot of attention in France! At petrol stations the car was a superstar. If people were not looking at it they were videoing the car! I was only hoping to go on a wine trip in an old French car, not to feel like some Z-list celebrity!  However, one bloke did admire our car quite a bit.  A Belgian.  It’s fair to say that we admired his motor too.  Seeing as it was a Jaguar Mk2 it’s not hard to see why.  With some great modifications made including better brakes and larger wheels it was lovely to admire the car.  With him speaking a little bit of English and us a little bit of French we somehow managed to chat for ages and ages.  I guess old cars do that, they have their own language!  It certainly was a great time! 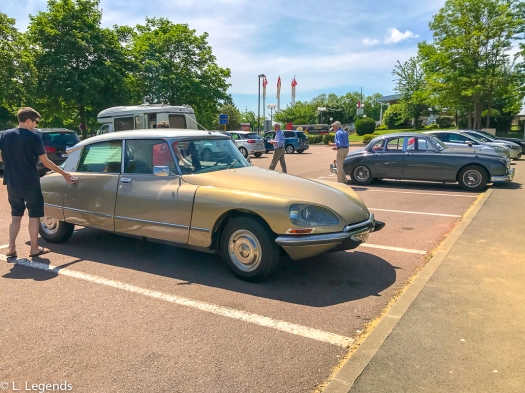 But we were not foolish.  With the car begging not to be coasted the return journey was going to be interesting.    Somehow we managed to make the boat back to the UK.  Hurrah, we could relax.

Upon leaving Felixstowe and heading onto the M20 all was looking well. We could keep the speed up to motorway speeds and the traffic was minimal. Unsurprisingly this would all change as soon as we hit the M25, heading towards the Dartford tunnel. The traffic went from being minimal to being surrounded by slow cars everywhere! It’s not an ideal situation in a car that you can’t coast in. With the car knocking more than Katie Price’s assets on a binge fuelled night it was getting tense. We attempted to coast the car but as we failed more and more to do it in the traffic the knocking simply got worse and worse. Eventually we were driving so erratically that motorists behind us must have hated us. 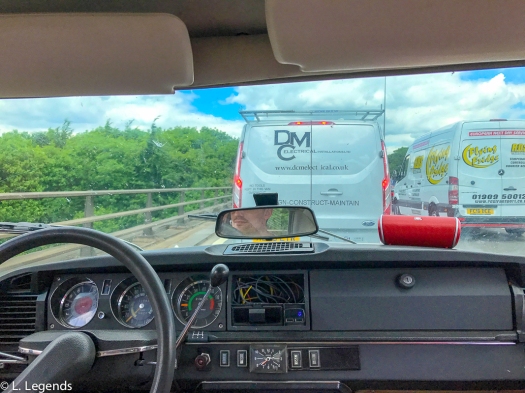 Despite stopping at two services the traffic showed no signs of slowing down. The car decided it would protest even more. Pulling into South Mimms we heard a metallic banging sound followed by the wheel trim overtaking us. As soon as it hit the kerb we heard a gong! While the car was trying to humour us we were far from impressed. The car was having enough, we were having enough and at this point an RAC truck was not yet an option ; with the traffic we would have been waiting hours for the truck to arrive.   Not what you want after a drive from Cambrai.

As the knocking got worse I soon had visions of us ending up in the Herts Tribune, with imagery of the wheel falling off and us going under a truck. Going past Daventry things got worse on the A-roads. The interior of the car got very hot, ideal in a car without a temperature gauge. What’s more, it looked like the Chinese Voltage regulator was having enough with the voltage slow dropping closer and closer to 12V.

By some miracle we arrived back home. A feeling of relief, joy and accomplishment all culminated into banter towards the car, towards us and towards future trips with such brilliant planning.  When we got back we soon had an idea of why the car was getting so hot.  The answer stared us in the face when we opened the bonnet:

Yup, those belts were destroyed!  But let’s be honest, the breakdown was part of the trip!  It made it different, it made it tense.  Dare I say it the trip was possibly a bit more fun!  It’s something to talk about down the pub after all!

So, here is to the next trip!